Posted at 15:19h in Featured News by Corbin 0 Comments
0 Likes

The donation was presented during the corporation’s official launch party held last month at Dapur Asian Tapas & Lounge restaurant in Fort Lauderdale. “This donation was such a surprise,” said Corbin Stacy, founder and president of NamaStacy Yoga Corporation. “I’ve been a huge fan of lululemon for years and I’ve been so impressed by their commitment to the yoga community; to have their support is very rewarding!” 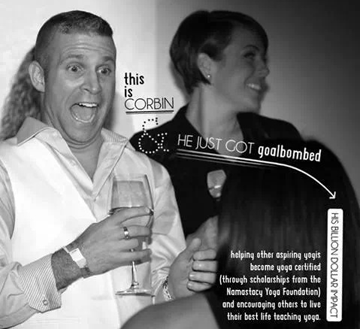 NamaStacy Yoga Corporation was founded with the mission of paying it forward. The Corporation raises funds to provide current and aspiring yoga teachers worldwide with scholarships to be used to pay for Yoga Alliance recognized teacher trainings, workshops, continuous education credits and retreats.

Stacy started the corporation with two of his good friends and fellow yoga enthusiasts Jen Cohen and Donna Nurmi, who serve as Vice Presidents of NamaStacy Yoga Corporation. “Between the three of us, we have almost 70 years of corporate experience,” said Stacy. “Each of us bring something unique to the table and can certainly attest to the life-changing impact yoga has had on our lives both personally and professionally. We want to make life a little easier for anyone wanting to pursue their dreams of becoming a yoga instructor or a better yoga instructor.”

NamaStacy Yoga Corporation recently awarded its first scholarship to Jennifer Cannon of Miami who attended Yoga Gangster’s outreach certification. Yoga Gangsters is a national non-profit who empowers youth by addressing the symptoms of trauma and poverty such as limited education, addiction, violence, incarceration, teen pregnancy, HIV, and more through the practice of yoga. The second award of the year has been given to Alexis Georgia of Fort Lauderdale to take internationally known Seane Corn’s vinyasa teacher training in Miami.